When I was 11, I remember my neighbor Alfred asking me to try this meat he made. As gazed down, I saw a cool whip container that he had repurposed as tupperware with nuggets of a dark brown beef-like substance. Since his wife was my babysitter and had my mother’s permission to punish me, I obliged. After a couple bites, I told him that it was pretty good and tasted a lot like roast beef. Right away, Alfred burst into laughter and I realized that there were others in the room waiting to see me the meat. Alfred managed to blurt out in between his laughs that I had eaten cow tongue. I was traumatized but intrigued. I realized that I was supposed to grossed out by the thought of eating a cow’s tongue but it was pretty good (which I kept to myself).

Now in my 20’s (I can say that until April), I’ve come to embrace my adventurous eating habits and have eaten pork belly, tripe, tendon, sweet cheeks, and lots of other savory delights. Of course, it’s now in vogue too. But, I’ve never again tried tongue and recently saw that my farm had it in stock. On a whim, I ordered it.

I safely stowed it in my freezer waiting for a day when my other half would be out of the house the entire day so I could slowly cook it. I’ve diligently “pinned” recipes to my boards and have dreamed of the night when cow tongue and I would meet again. Today is that day.

I chose a recipe by a Canadian Chef – Jesse Vergen which can be found here: http://unsweetened.ca/2013/06/beef-tongue-tacos-recipe/

I found that it was a little different following the metric system but also quite exciting. I made only a few modifications to the recipe.

First, as the tongue slow cooked, I did add some pickling spice to the mixture (just a tablespoon). Also, I can’t seem to make corn tortillas myself. They are always crumbly and dry so I used flour tortillas instead. I think it’s due to my lack of patience and not kneading long enough. 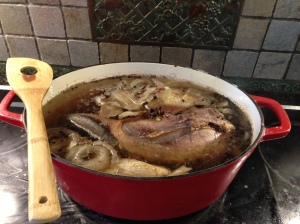 When I reheated the meat, I didn’t have a beef fat so I used some duck fat.  I served with sour cream, chopped olives, cilantro and all the normal accouchements.  When my fiance took his first bite, he said what an amazing job I did preparing the meat.  At that point, I told him that it was cow tongue and he nearly spit it out.  It all comes full circle, doesn’t it?